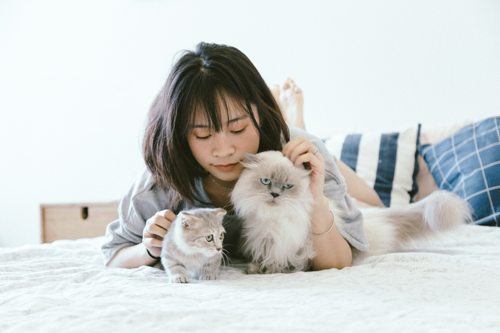 Torn between getting a dog or a cat to keep you company? Don’t know which one is easier to keep around and takes less effort caring for?

As with all other pets, hygiene is an important piece of the puzzle to solve: Are cats clean animals? Cleaner than dogs? Read on to know the answers!

The Answer To Your Cat’s Hygiene Problem

How Do Cats Clean Themselves?

Cats might be little balls of deviously mischievous furballs sometimes, but they are also a joy to care for and hang around. And cats aren’t that messy to look after too since they practically clean themselves all the time.

Cats are known for their cleanliness and rather organized lifestyle compared to dogs. They spend a large part of their day licking away at their fur.

This process, also known as “grooming”, is an integral part of a cat’s day and is the primary way for cats to maintain their hygiene,

With their barbed tongue, cats can pick away dirty or otherwise lose fur from their bodies.

Usually, this allows the cat to rid its fur of parasites such as fleas and mites. The excess fur will build up in the stomach, only to be coughed out in time as furballs. Gross as they are, the fur clumps are usually harmless and can be mitigated somewhat by regularly brushing your cat with a stiff comb or brush.

Aside from the obvious purpose of self-grooming, it also cleans the cat of foreign odors that might linger from food and other environmental sources.

This might stem from their original feline hunter instincts, allowing them to hunt more efficiently and avoid prey detection.

It doesn’t take much effort potty training a cat, nor is it hard cleaning up after their mess. Cats instinctively bury their faeces after they’ve finished, so as long as you have a well-prepared litter box, you should be fine.

Additionally, cats’ cleanliness can also be seen from their eating habit: they avoid eating near their litter box. This makes sense both from a human and cat’s perspective.

Back in the wild, where cats and other felines got the kill was also where they eat. The remaining carcass of the prey would eventually decay, and if there was a water source nearby, contaminate it. So keep that in mind when making space for your cat. Certain cat breeds are also picky about where they do their business as well, such as refusing to go potty in dirty litter boxes, or refusing to share their potty place with other cats,

Which is Cleaner? Dogs or Cats?

Cats are generally pretty clean, but are they cleaner than dogs? Surely licking yourself all day can’t make you the Mr. Clean of the animal kingdom? In general, cats are indeed more hygienic animals than dogs. Their self-cleaning and self-preservation nature make them a much tidier pet to look after.

Aside from grooming themselves, cats, in general, don’t have quite the odour compared to dogs. Dog-lovers would know that musky odour that a dog has if not bathed frequently enough. Furthermore, since dogs can’t groom themselves like cats, their dead skin cells and loose fur, alongside secreted skin oil can give off the heavy “doggy” smell.

Cats are less likely to roam and play around the garden too, so the chances of returning home covered in mud and dirt are significantly lower than that of dogs.

Dogs’ excretion habits are rather different from that of cats as well, as they don’t mind much when it comes to where to do their business. It takes a lot of effort to potty train dogs, compared to cats.

That said, however, when it comes to shedding, both animals need equal attention. When warm weather rolls around, take additional care when brushing and cleaning your pet, since shredded hair and dead skin cells contribute greatly to house dust. Pet allergies are further exacerbated by this as well.

How Can You Keep Your Cats Clean?

Looking after a cat is certainly not the hardest task in the world, but there are definitely things you must be mindful of to make sure your furry friend is happy:

As established before, cats are rather easy when it comes to their potty business. Once trained, all you need to do is clean their litter box frequently. Most cat owners would recommend cleaning it twice a week. Depending on your personal situations, daily cleaning might be necessary and in rare cases, only once per week would already suffice. Remember, cats would refuse to use dirty and unclean litter boxes, so pay attention to your cat’s habit. We suggest cleaning as soon as there is an odour present.

When cleaning your cat’s litter boxes, don’t forget to scrub the box lining thoroughly with mild dish cleaning soap. Avoid heavy-scented ones however, as fragrances appealing to you like lemon or lavender can be appalling to your cats. Furthermore, try to consult your veterinarian at least once on the products you’re using to clean the box, as some might contain chemicals harmful to your cats.

Pay Attention to Their Food and Drink

As mentioned above, cats avoid eating near their litter box, so leave your cat’s food bowl in a separate area. Their water bowl should also be changed regularly to keep it fresh. It should also be placed away from the food bowl.

You’ve also seen clips of cats drinking directly from water taps online as well, and that’s because cats, by their instincts, associate standing water with stale ones just like in the wild.

Thus, they generally avoid drinking from them. So while they would still drink from the water bowl you’ve prepared for them, don’t neglect to change them.

Are cats clean animals? Cleaner than dogs? – Indeed they are, and there’s a lot more to it than that. Cats are super adorable furry friends that are not without their hilarious moments.

Yet behind every adorable cat pic you find online, there is a lot of care going into keeping them happy and healthy. All you need is love, some attention, and a lot of phone memory space for those derpy moments!

ChocolateAndCraft.com is a participant in the Amazon Services LLC Associates Program, an affiliate advertising program designed to provide a means for sites to earn advertising fees by advertising and linking to Amazon.com.

As an Amazon Associate I earn from qualifying purchases.